Celebrity Cruises announces “Big, Better, Best”promotion with choice of inclusions: Classic Beverage Package, Unlimited Internet, $150 on board credit, or pre-paid gratuities.  The best is that each person in the group picks THEIR choice of inclusion!  If budget allows, clients can also choose to purchase cabins including 2 of the 4, or all 4, in which case the premium beverage package is included!

Norwegian Cruise Line announces ‘a la carte’ pricing in many specialty restaurants, rolling out first on the new Escape in October, 2015 and launching fleet-wide on January 1, 2016.

Celebrity Cruises announced today that next month, 37-year-old Kate McCue will take over as captain of the Celebrity Summit.  Ms. McCue will be the first female U.S. citizen to captain a cruise ship!

The world’s major cruise ship companies are in supersize mode. 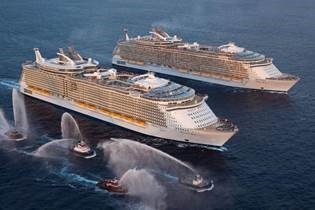 Six years after the launch of the largest passenger ship ever built, cruise giant Carnival Corp. announced that some of its upcoming vessels will hold more passengers than any other at sea: a maximum of 6,600.

While they will be the most packed, those vessels won’t even be the world’s largest. That superlative belongs to Royal Caribbean International, which in 2016 will launch its biggest megaship yet, Harmony of the Seas. That 5,479-passenger, 227,000-gross-ton behemoth is a slightly bigger sister of the $1.4 billion Oasis and Allure of the Seas, which currently hold the “world’s largest” title.